I had problems downloading photos for about a week now.  No matter which card reader I used, no luck.  Not sure what I did differently this morning but, voila!
Leaving Denver... 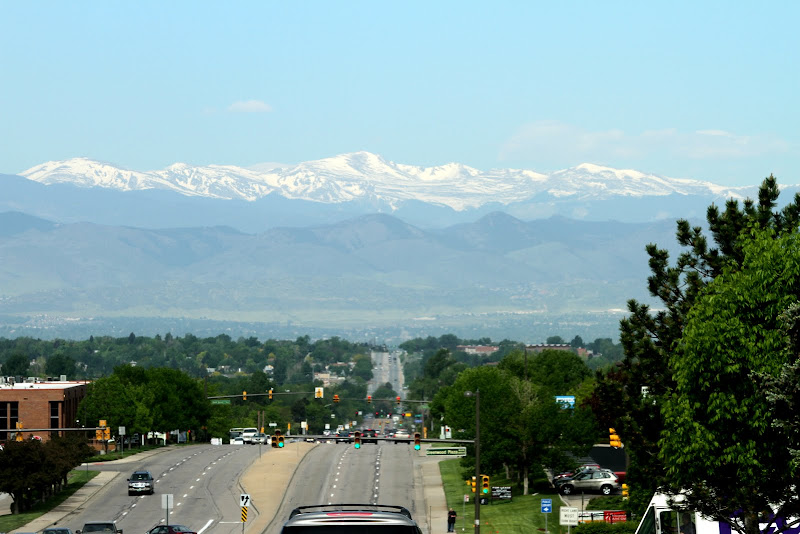 Denver is a beautiful city, but the traffic is atrocious! I kept trying to picture it covered in a blanket of snow.
While there, we visited an old friend who works at the Comcast Media Center.
Since Hubby and I both worked in cable years ago, he knew we would want a tour of the inside of the building. This is the place where all of the newest technology is created. Some fantastic stuff coming! Many of the programs that we all watch originate from that building. Security is very high in the building. We were very impressed with the brain power that goes in to putting all of that together.
The place we stayed in the area, was Cherry Creek State Park; a very big reservoir (can't find my pix). The campground itself was like a big park with lots of trees and green grass. It's a very popular park for bicycling and picnics, both in the park and along the lake.
The Magpie was the bird we saw the most.
I know this next pic is blurry, but I wanted to show the pattern on their back when in flight.
They're not particularly shy, except when they see that camera come out. I've seen pictures of them in my audobon book, but I was so excited to actually see them in person!
We had a great time there, visiting some family and friends. Didn't have time to see everyone we wanted to, but we'll be back.
Posted by shabby girl at 7:31 AM