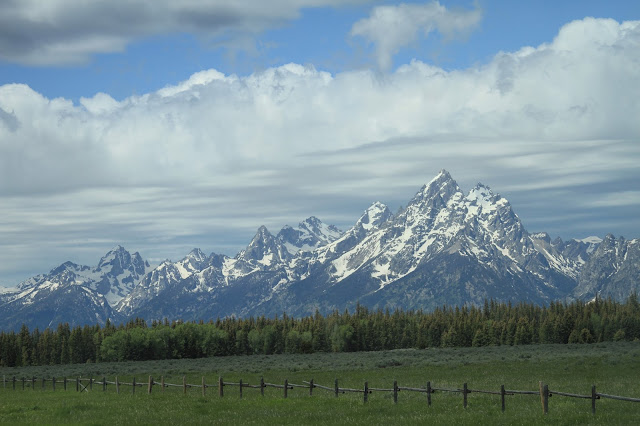 We took this photo of the Grand Tetons in Wyoming in 2012 while still moseying around the country in the motorhome. They're so majestic, aren't they?

I miss it, the traveling from the comfort of our home on wheels. I miss waking up one morning and deciding where we'd like to go next. Freedom is what that was. Yes, we're still free, and could still travel in our little travel trailer, but it's not the same. Plus, I work two days a week at a motorsports dealership. Crazy...me working in a motorcycle, atv, & side by side business. I know nothing about motorcycles, no interest whatsoever, although I do seem to be picking up weird odds and ends about them. I work in the office handling the co-op with the manufacturers. That's how that all started. We are the advertising agency for Cochise Motorsports, as well as others. One day the owner asked if I would like to work a couple of days a week. Let's face it, I was already putting all of the co-op paperwork together for their billing, so it was a no brainer. And the idea of a little extra cash for grandkids presents was enticing!

When he hired me, he said he realized that we were nomads (well, actually he said we were transients and then upgraded us to nomads), and would want to travel some. But as we've settled into our new house in February or March, then started re-imagining the backyard, somehow we've become home bodies entrenched in hauling rocks out of nearby washes and planting trees. It's hard to let go of the idea and feel of planning road trips and just going, but will we do it? I just don't know.
Posted by shabby girl at 2:58 PM 3 comments: