We've been in the Portland area for about a week. We've checked out the Belmont Food Carts (yummy), going to the farmer's market at the university, and spent an afternoon at Multnomah Falls. It happened to be a gloriously warm, sunny day.
I expected to have to hike a bit to get to them, but when I turned around in the parking lot...
Then it was a little hike to get close.
There was just something fresher about the air here. I know that sounds weird, but true.
We had planned on hiking to the top, but we had Shasta with us & came upon a sign that said the trail had poison oak ahead. Nope, not me. Not going. If Shasta brushed against it, I would be in misery for two weeks solid.

The falls drops in two major steps, split into an upper falls of 542 feet (165 m) and a lower falls of 69 feet (21 m), with a gradual 9 foot (3 m) drop in elevation between the two, so the total height of the waterfall is conventionally given as 620 feet (189 m). Multnomah Falls is the tallest waterfall in the State of Oregon. It is credited by a sign at the site of the falls as the second tallest year-round waterfall in the United States.
We've been so busy lately with the motorhome & work. I'm really looking forward to getting out to see more places like this!
Posted by shabby girl at 9:04 AM 2 comments:

Email ThisBlogThis!Share to TwitterShare to FacebookShare to Pinterest
Labels: Portland

Oh, he had a grand time!  The other person that signed up to go out didn't show up, so that left Hubby and 3 other men to waite on him hand & foot! (bait the hook, take the fish off the hook...)

All of the men caught their limit, but in particular, hubby caught 8 sea bass, 2 ling cods, 2 rock fish, and a 50-60 lb. halibut that he had to release because halibut season ended a few weeks prior. 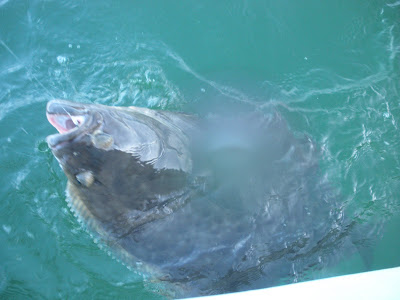 That was as far out of the water as he was allowed to take him.
The guys emptied their crab pots at sea as well, brought in 40 crabs & probably let another 40 go. We brought home 17! 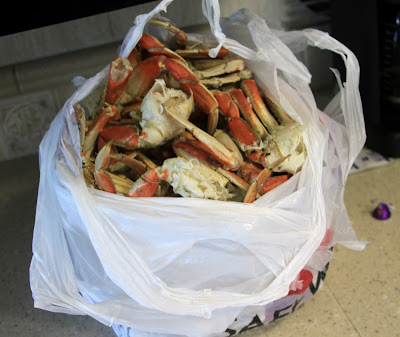 As they pulled the crabs out of the cooking pot, the owner says, "Ever tasted a crab right out of the pot? You won't believe how good they are!" Well, I guess I couldn't believe it because we ate three right there! Awesome! 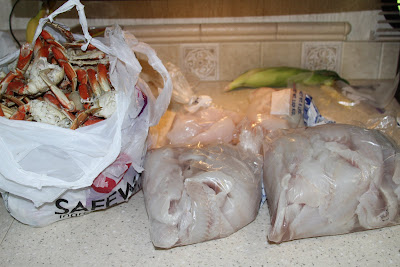 Our freezer is so full of fish & crab that we had to go around the RV park to find people to give some away to. Our next door neighbors took a few & the next day she brought us these. 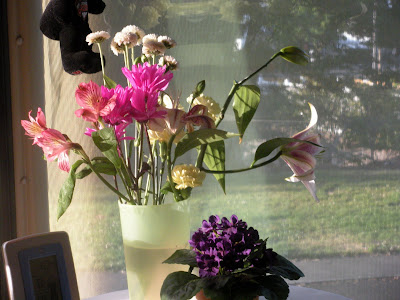 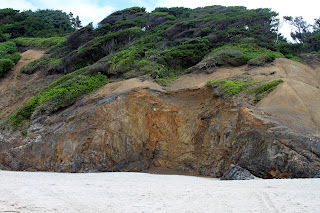 Today Hubby went in to town to get a fishing license AND a shellfish license.  So, he could, and will, pick some of those oysters off that rock I posted yesterday, in the next couple of days.  The Fish & Game dept. just asks that you don't take any more than you'll actually eat.  I think I'm going to have to look online about how oysters reproduce and how the connect to those big rocks!

Hubby is also going out on a fishing trip tomorrow morning at 5 a.m.  He's going out on a Dory boat, a flat bottomed boat (more about that boat & their affiliation with this area later).  He's guaranteed to bring home fish & crab.  Here's the really cool part!  The staff fillet & scale the fish, vacuum bag the fish for freezing, and cook the crab, all before he comes home!  WooHoo!!!
Posted by shabby girl at 7:59 PM 2 comments:

Email ThisBlogThis!Share to TwitterShare to FacebookShare to Pinterest
Labels: Or, Pacific City 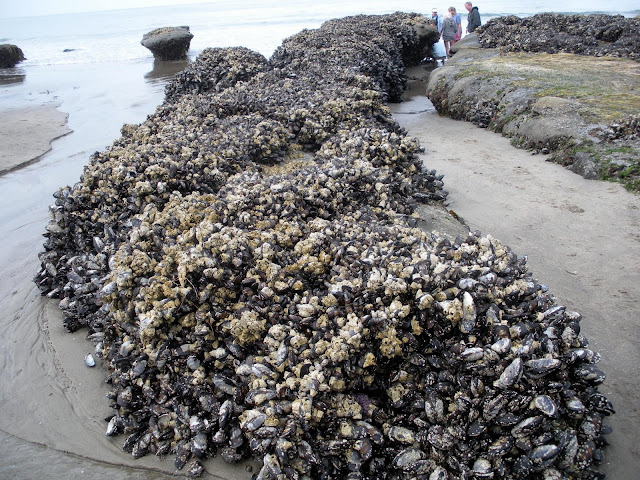 Just to get a little idea of what's below that pretty blue blanket of water...the closer we got, the more amazed we were! 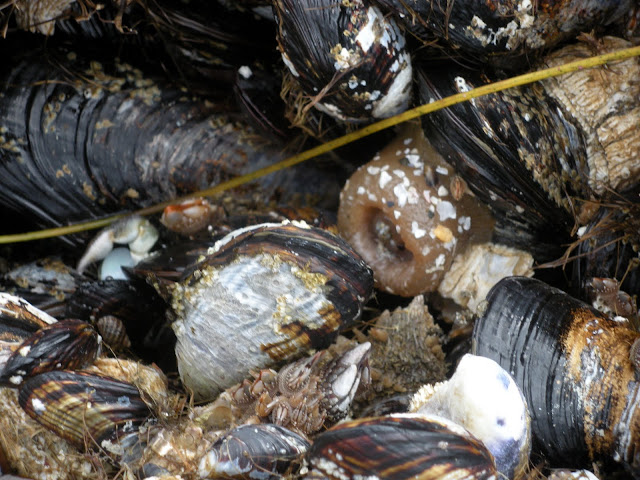 The round thing in the middle was actually opening & closing. Is it a sea cucumber, or what? 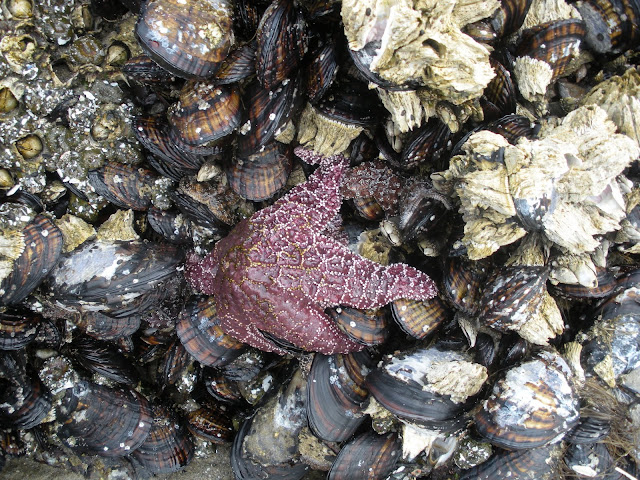 Gobs of muscles & Lots of starfish! 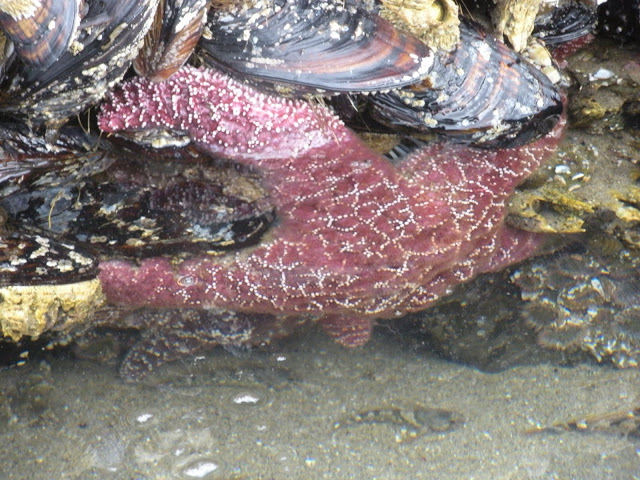 Another starfish & look at the little fishes in the puddle! 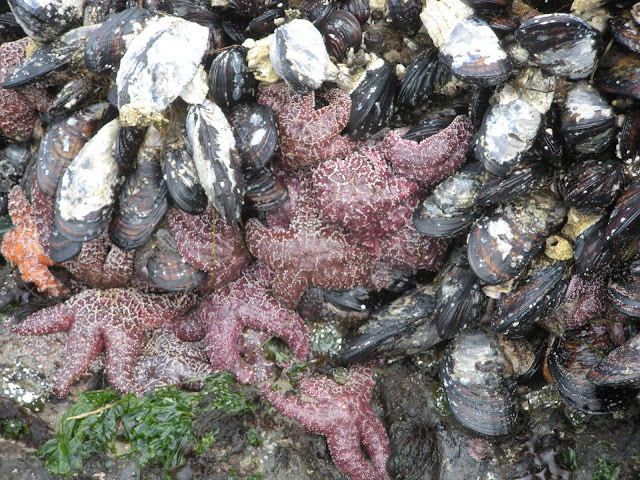 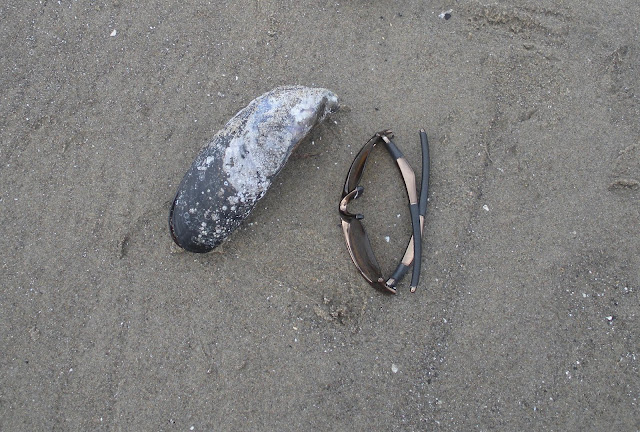 Check out the size of these muscles compared to my sunglasses!  What a cool find this was for us.  Timing is everything, right?
Posted by shabby girl at 7:18 PM 5 comments:

After a very stressful drive around, and around Corvalis, looking for Hwy 99W going north, we ended up at our destination in Pacific City, OR.  (Kerry, your city of Corvalis is gorgeous!  As we drove through downtown twice with the building on wheels, we were still charmed by all of the outdoor activity along the streets, even while sweating the traffic!)

We set up camp, walked Shasta for a while, then decided we needed some calm down time at the Pelican Pub & Brewery on the beach.
Along with a nice glass of vino, we had some oyster shooters, served in shot glasses full of a tomatoey base with lemon and cilantro.  They had just been brought in that morning from the next bay up from us.  Oh my Lord!  They were so good!  Since that night, Hubby has bought oysters almost every day from the local grocery store! (Much less expensive from the grocery)
Look how huge they are! Yummy!

I was surprised to see that vehicles are allowed on some of the beaches here.
As the afternoon sun hit the wet sand, the ground steamed.
Big, full, deep breath of that clean ocean air!

Thank you Davis Cabinets!  The corian will be taken off this morning and have holes put in the back of it for the monitor wires.  Once our printer prints its last page, we'll get one that will fit inside the desk behind one of the doors.  We had to steal knobs and handles out of the bedroom since these are not available anymore.

The desk is much bigger than I had envisioned, but I really like it.  Today should be the last day of remodels, repairs, and parking lots.  It has taken almost a year, but I think we're finally at the point of getting on with some fun!  Yahoooo!
Posted by shabby girl at 7:20 AM 4 comments:

Oh the mess, the nowhere to put everything, makes me crazy, before...
Posted by shabby girl at 12:11 PM 4 comments:

We went "downtown" this morning to watch the 4th of July parade. I'm not sure which family it was, but there is one particular family that is celebrating their 100th reunion this weekend in Harrisburg, OR. That's pretty cool in my book.

There were probably several thousand people lining the streets to watch the fire trucks, floats, and tractors go by. And of course, the kids were giddy racing to get the candy that was being thrown from the parade! One thing I noticed is the ubiquitous tatoos! Really, I have never seen so many tatoo'd people in one place! What an economic boon for anyone that is talented enough to draw something "permanent" on somebody else! Cracked me up.
These 4 huskies were pulling a cart carrying candy for the kids.
We had a great time watching the parade, then headed down by the river, where food booths were set up. A pulled pork sandwich and a shave ice later, we plopped ourselves down by the Willamette River for a while before we headed back to the mh.
I hope you had a wonderful weekend!
Posted by shabby girl at 5:03 PM 1 comment: