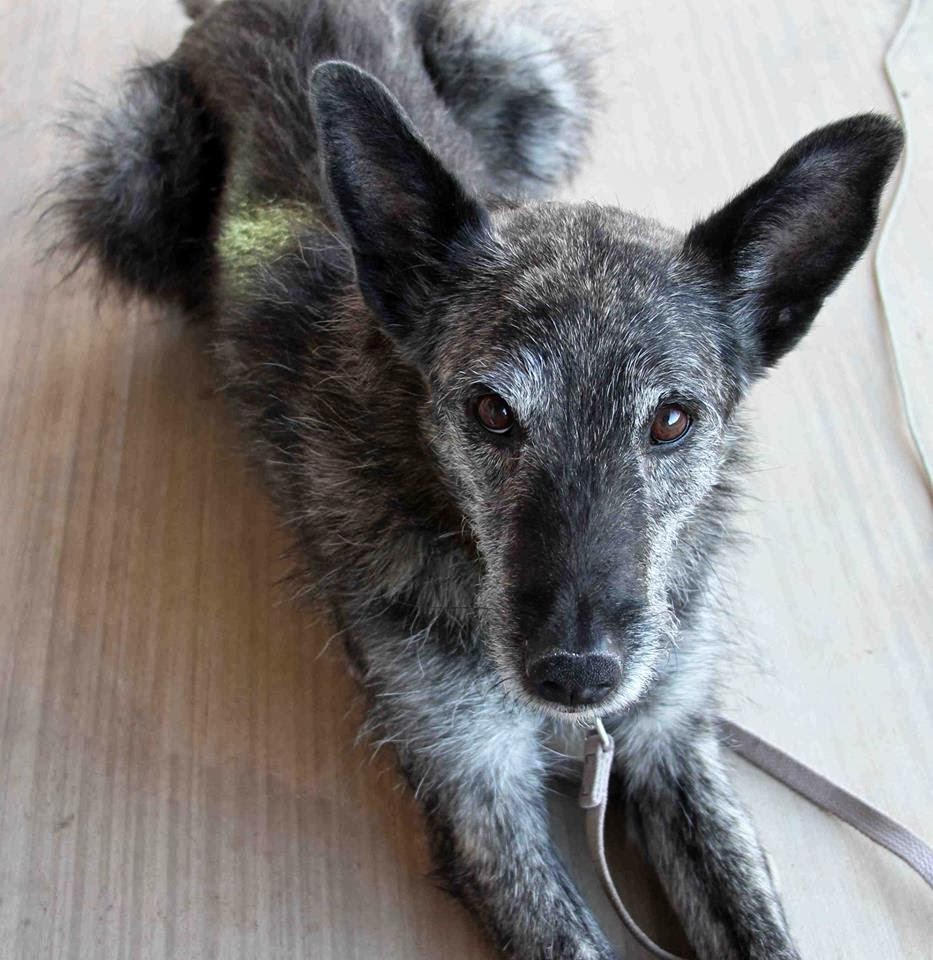 We have been talking "around" finding a rescue dog to make a part of our family for a few months now. We knew we had to wait until we moved back into our house. It wouldn't have been fair to uproot him a couple of different times through our transition out of the motorhome.
We looked at rescue sites online for a couple of weeks. And look who jumped out at us! He's a little larger than I thought, but after a drive (1 1/2 hrs) to Tucson, we weren't going to let that stand in the way. They say 45 lbs, I say 50. He's part Scottish Deerhound and part German Shepherd? Reggie is seven years old and pretty well-behaved. The warning that came with him is that he's an escape artist! (Can scale tall buildings, climb a chain link fence, and jump into the neighbor's yard in a single bound.) Well, he did end up in the neighbor's yard one day with their two dogs. Luckily, they all got along, but then there was the problem of getting him back into our yard. They were not home, gate locked, and no way to get him. After much coaxing, he managed to jump between the metal slats, and was really happy to be back on this side. 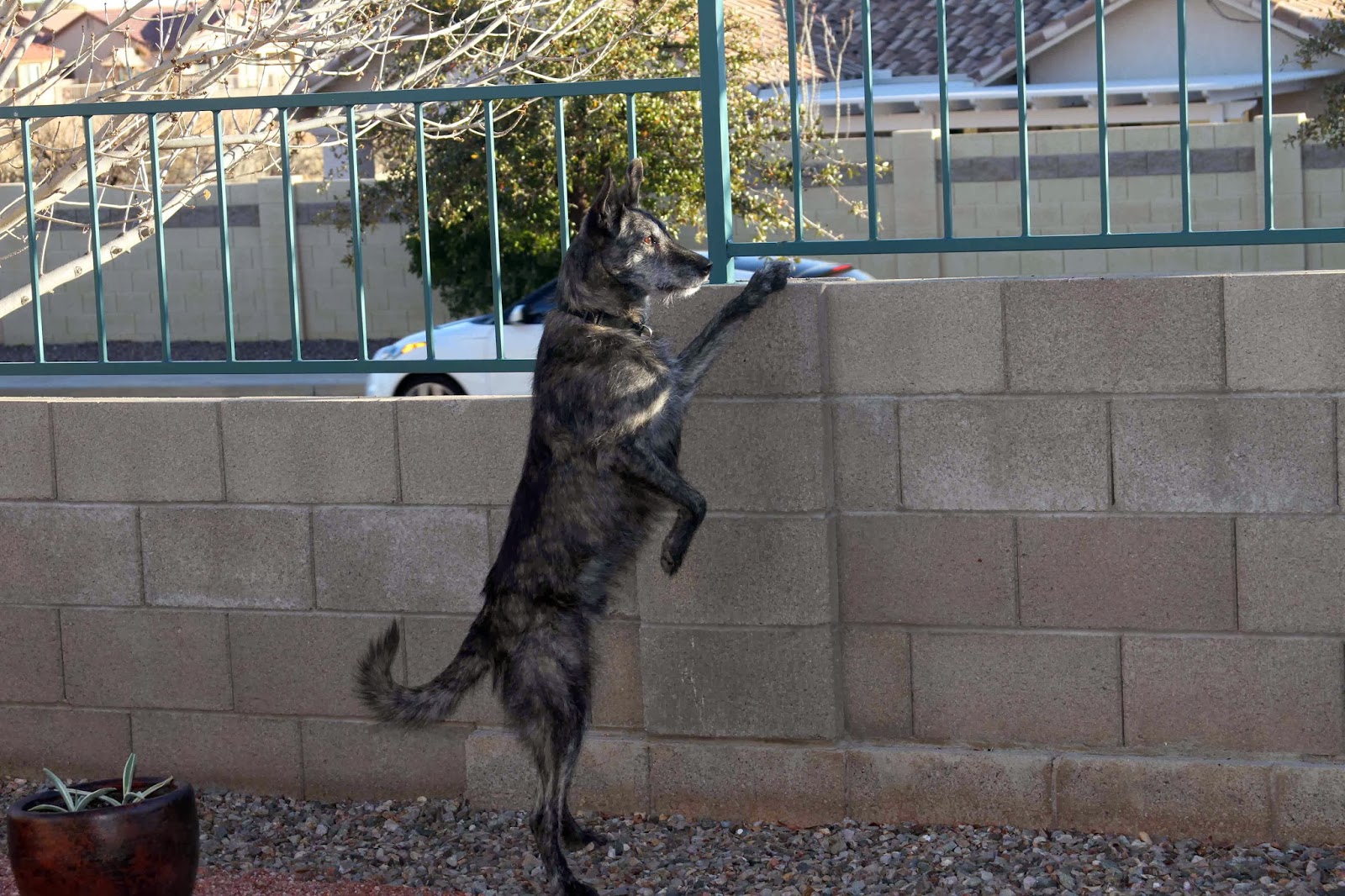 I think the only thing that stops him from going over this back fence is that there is about an 8' drop on the other side. I can only pray that he doesn't try it!
﻿
Reggie has slipped out of his collar on a walk, and had THE best time galloping around the neighborhood. We keep having to figure out new ways to foil his exploits. For this one in particular, we found a really great harness at Target by Boots & Barkley, $12.99. It has material that fits under his chest up to the collar area of the harness in front, and more material that clips around his tummy and back. The ring that holds the leash clip is attached to the back section which keeps him from using his neck muscles to pull. Plus, the edging on the material is reflective! Cool.

He never barked for two days. We began to think that it was just the Deerhound in him (they are not big barkers). Well, not so much. Yes, he will bark at the neighbors, anyone walking on the street, and pretty much anyone he doesn't know, and that is everyone.

Here's the good news. :) I believe that he has had some training before, not that anyone recently has followed up on it. I'm the first to admit that I was never good at following up with training either with any other dog that I've had. I find that this is a very different situation. He was surrendered by his original owner because they could not contain him. My feeling is that he spent way too much time alone in a backyard. I get it. People have to work, etc. Then he was taken to a shelter (SPCA), evaluated and kept there for as long as is allowed. Cold, Wet, Noses (a no kill animal rescue) in Tucson picked him up, got all of his shots up to date, his teeth cleaned, and placed him in a foster situation.

He was adopted a few weeks before we found him. They had him for a few days then returned him for whatever reason. Well, actually they said Reggie did not like them. Imagine how confused this boy must be!

So, we have started our own training with him through PetSmart. I will be much better at following up, because he has been through so much already. I can't imagine letting him down again. We had our third week of training today. He is doing well. Of course, when he's all fired up, not so much, lol, but we are committed to making this work, and to make him a happy boy for as long as he has left.
This is the picture we saw online. 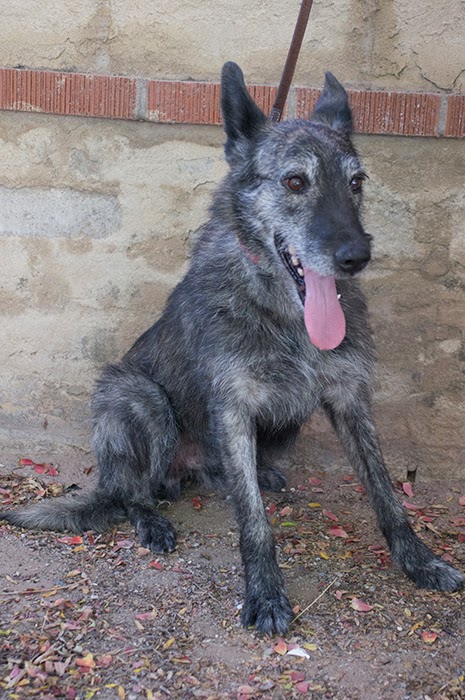