A Sad Day, But Still Hopeful 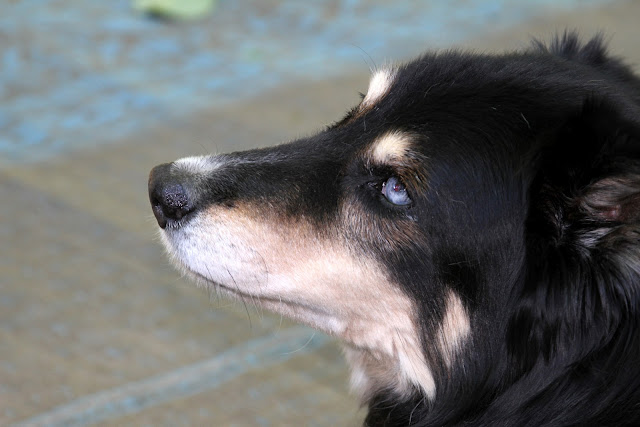 Friday night, around 5:30, sitting outside talking to a neighbor at our site, Shasta listed to the side. We all jumped, thinking it was a problem with her hip. Within seconds, it became clear that she was in full seizure. Turns out our neighbor is a fireman in British Columbia. He helped us through not only this one, but the next three. She bit through a piece of wood, and his finger.

Rushing to the emergency vet 15 miles away, it was after 5p.m. on a Friday night after all, she seized three more times in the car. They gave her Valium immediately to quiet the brain, then evaluated her. They put her on Phhenobarbital and Diazapam, trying to keep her seizure free for 12 hours, so she could come home to us the next day, but she seized a couple of times through the night.

We arrived at the vet today around noon, after hearing this morning that Hubby's stepmom had passed.  (We knew she could pass soon, but never imagined that these two events would happen at the same time.)

They let us into the backroom right away, thankfully. Shasta was so drunk with drugs, but she responded to us with a slow, stoned, wet nose kisses, and whines of what she'd been through. Shasta has always been very vocal in so many circumstances. :) Ask any dog that camped anywhere near us.

The nurse offered to carry her out to the grassy area behind the building so we could spend some time together out of that cage. She carried her outside, down the stairs, around the parking lot, and to the most beautiful area of grass with a little creek rustling over some rocks. The nurse mentioned that when things got too awful in the office, she would come out here and sit by the creek. It saved her.

We layed in the shady grass with Shasta, listening to each other breathe, rubbing belly, and looking into one another's eyes. Occasionally she would wipe that slow dry tongue across my face. She cried for her mom and her dad when she looked at us. Tried to tell us how confused she was. She also fell asleep to a rub under her arm which she loves, and my head on hers. Her breath quieted, and I thought she had some peace at that point.

I felt hopeful then. Even with the stimulation of us being there, she didn't go in to another seizure. We left feeling hopeful, and after calling several hours later, heard that she drank some water and had a bit to eat. Well, I guess it's just never that easy, is it, especially not knowing what the cause is. More seizures tonight during her stay at the vet.

We're saying our prayers tonight for our dear Shasta to not be in any pain, and to wait for us to get there in the morning to bring her home, no matter her circumstance. She needs to be home.
Posted by shabby girl at 10:32 PM