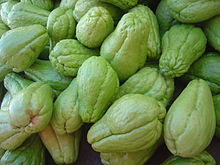 I have been afraid of these for years. Yes, I've seen them in the grocery stores, but I never see anyone buying any. Nobody saying, "Oh, there's the Chayote!"

Hubby is one of those people that will try ANYTHING, and I do mean anything. Thus, my fear of the unknown. I mean, when we were in San Francisco one time, he went off with a little Asian woman through two or three stores in Chinatown simply because he had asked her what these strange long beans were and how to cook them.. She really didn't even speak English, but that didn't stop these two. She had ahold of his elbow, and led him around trying to explain how to cook Dragon Eyes, or whatever they were called. They communicated on some visceral level that I was not privvy to.  He came home with some pretty bizarre things, but he was in heaven. And how awesome was that woman to take the time to try to tell him how to cook all of those strange things? That was so cool.

Yesterday, he came home with two Chayote. Ah geez. Really? Well, I don't have to eat them. He will probably be more than happy to eat them both himself.  Imagine my surprise when I tasted this:

Whisk the juice of 2 limes, 2 tablespoons olive oil, and a pinch each of sugar and salt in a bowl. Thinly slice 1 peeled chayote, 1 avocado, and 4 radishes; gently toss with the dressing.

Easy peasy, and delicious. Let me know what you think!
Posted by shabby girl at 4:55 PM

Email ThisBlogThis!Share to TwitterShare to FacebookShare to Pinterest
Labels: Chayote